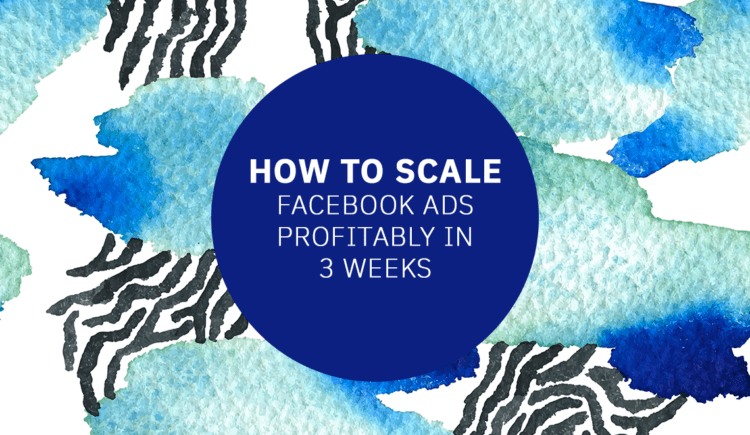 Last week was one of the best weeks of my Facebook ad buying career. I took over the ads completely from one of the brands we have been working with for over a month and experienced amazing results. Their ad spend was somewhere around 15k/month and now we’re comfortable spending 2.5k/daily.

Let’s break this down into three easy to understand categories:

Mastery of testing is fundamental for the success of your ad campaigns. Because most of the e-commerce brands have been burned by the other agencies signing a 3-month contract and are super susceptible, my CEO came up with a great idea – 3 week testing period. In these 3 weeks, we show the client what we can really achieve for them so we win their trust & they’re more likely to sign a contract with us. So as we took on this particular client, during our testing phase we managed to reach 5x ROAS and we were quite comfortable taking them on and achieving great results. During the testing phase, we created a bunch of already proven creatives in the industry (‘Buzzfeed’ style videos as we call them) and multiple single interest audiences.

So 2 things that we focus on:

1. Single interest audiences. Already proven creatives for our other clients.

2. Optimization. Optimizing your sales funnel is crucial for driving sales to your store.

After we signed them on a longer contract, I immediately started working on the retargeting to maximize the ROAS from the traffic I bring.

Here are 4 steps for the retargeting audiences I created:

MOF up audiences (website visitors, video views 75%+, engaged with Facebook and IG but no further actions). All of the audiences were up to 60days “old”.

MOF down audiences (went to the content page, but not added to cart). Started by doing it up to 30days and allocated the budget accordingly. The closer to the action they were, the bigger the budget.

BOF audiences (Added to cart and Initiated Checkout). Same again, but the biggest chunk of the budget was allocated to the closest to-the-action audiences.

Back-End. Created the ads for people who purchased from us in the last 10-20days with a “thank you” message. 30-60days with general DPA ads. And 90-180days after the purchase I hit them up with our top-performing ads.

We could’ve used more audiences offering discounts or giving some offers, but we were tied to work with what we had.

DPAs vs Other types of ads:

I used to use DPAs across the whole retargeting funnel (with the messages according to where they are at the funnel), all the way from MOF up to the Back-end, but after testing it for a while, I found that the ads, which work well at the top of the funnel, work all across the whole funnel. So I used them together with DPA ads. The entire process looks like this: I test the ads at the top of the funnel with our 2nd or 3rd best-converting audience. Once it’s proven to work there, I start moving it down to the TOF with our best-performing audience. Then to MOF up, MOF down, BOF and Back-end.

It’s usually 0.5x to 2x higher ROAS I’m getting out of that. Note: the customer is an eCommerce clothing brand, so that might not work with different/more difficult accounts.

During the testing period, I figured out which are the best performing audiences for them and found out what are the ads, which work the best. Also in the past month, I’ve heard people rave about Campaign Budget Optimisation so I decided to put all of the best converting audiences into one campaign and start with a higher budget at the TOF with our best-converting ads. Since Facebook recommends us to get 50 events at the AD SET level, I put 3 to 5 ads to an ad set and let Facebook decide which ads to show.

Obviously I killed the ones that were performing below the average. Realistically for this account to get 50 purchase events, I would need a budget of $2.5k/daily per ad set. Since that was not possible from the get-go, I simply started turning off the ad sets that were not performing well, to have the minimum amount of them to let the ad set optimize better.

After a few weeks of optimizing the whole campaign, I started seeing +3x ROAS at the top of the funnel for 5days in a row (wanted to make sure it’s not luck) and decided to scale. I started increasing the budget by 20% every day and duplicated the campaign trying a few new audiences (when you use CBO, you can only have 70 ad sets at the whole campaign). That worked pretty well and was hitting 2.5x ROAS there too.

I’m still scaling it and not sure when I’ll be slowing down (if I will), but I’m testing new creatives all the time to replace the ones that stop performing at some point.

Scaling may seem complicated but can be broken down into testing, finding a winning audience, and reducing your ad sets while increasing your budget where it counts.

More importantly, when it comes to scaling, be patient! Taking the time to develop a strategy and see which markets will be the most successful allows you to only focus on meaningful areas and use your budget in the best way possible.

Scaling takes time and practice. However, if you do your due diligence, scaling large ad campaigns will become second nature.